As defined by the U.S. Department of Labor (DOL), aptitudes are "the capacities or specific abilities which an individual must have in order to learn to perform a given work activity". (Revised Handbook for Analyzing Jobs, 1991 p. 9-1). Some tests estimate aptitude levels. Use the functional task examples in the RHAJ to most closely estimate the functional aptitudes of the worker.

For more information about Aptitudes, review Chapter 9 of the 1991 RHAJ. 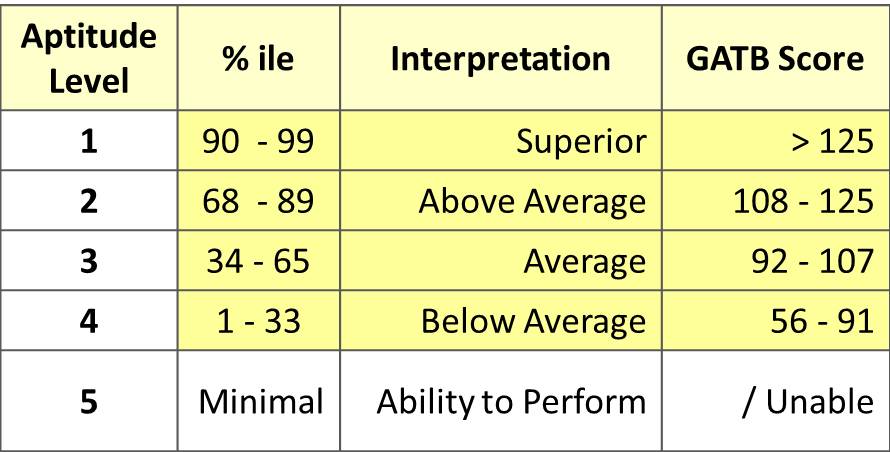 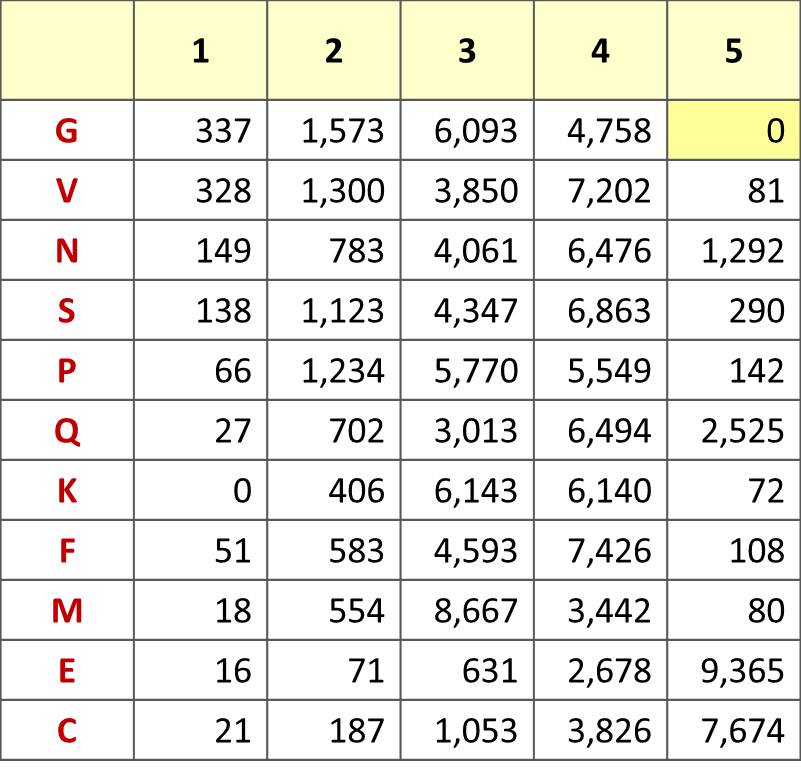 *** NOTICE that Aptitude G - General Learning Ability (Intelligence) counts no occupations at level 5. The reason is that the job analysts reserved level 5 for situations in which none of the aptitude was judged to be necessary to perform the job. All jobs require at least some intelligence; therefore, level 4 was the lowest functional level of any of the aptitudes. 1972 Handbook for Analyzing Jobs (page 294).

In the 1991 Revised Handbook for Analyzing Jobs (RHAJ - page 9-2), the U.S. Dept. of Labor introduced a suggested table of Aptitude Levels and percentile ranges corresponding to the "bell shaped curve" i.e. the normal distribution of test scores in the general population. Following basic statistical methods using the concept of standard deviation, the table is re-stated below.

HOWEVER ... in both the 1972 HAJ and the 1991 RHAJ, the explicit DOL instructions to job analysts when studying occupational requirements to assign a rating were as follows: "Aptitude levels are determined by comparing the tasks of the job with the aptitude definitions, interpretive information, and the examples of work activities shown for each level which appear in the next section of this chapter" (RHAJ, page 9-2). "In making his determination, the analyst will always consider the job as an organized method of carrying out a vocational purpose, and the illustrative situations as aids in making his judgment of the levels of aptitudes required." (HAJ - p. 294)

The job analysts did NOT administer tests to incumbents, nor did they determine the rating based on the prevalence of the aptitude among the general population. Ratings are based exclusively on the content definitions and examples cited in the books for each level 1-4. There are no descriptions of functional tasks at level 5 for any of the aptitudes. The 1972 HAJ specifically states: "Use numeral 5 if the aptitude is not required."

THEREFORE, since job analysts based their aptitude ratings using the functional descriptions of each level of each aptitude, it stands to reason that the aptitude requirements of occupations are NOT NORMALLY DISTRIBUTED. A study of the Aptitude frequency count table above supports this position. Examination of factors such as Aptitude E or C clearly show a huge skew indicating that most occupations require very little or none of these aptitudes. So irrespective of the normal distribution of these aptitudes in a general population, the aptitudes are not normally distributed across occupations. This disparity of distribution of aptitudes makes it difficult to strictly interpret test results in the proper context of occupational requirements.

BOTTOM LINE: Vocational professionals should carefully examine the functional content of any administered test and interpret performance based on test content analysis vs. the functional descriptive aptitude statements in the RHAJ. Furthermore, SkillTRAN recommends that test results be interpreted using level 4 as the lowest functional level assigned. Think of Level 5 as "the person cannot perform in this area at all", NOT "the lowest 10%ile". In the context of vocational planning of individuals with poor test performance and/or known deficiencies due to disability, step up to a level 4 since so many occupations can often be modified, accommodated or performed with selective placement and modern assistive technology.