The primary source of data used in SkillTRAN products is the United States government. Each of several government departments collect, gather, and report different aspects of data that can be related to occupations and the industries in which the occupations exist. The government does update its data and data collection methods from time to time. SkillTRAN is alert to changes in these systems which may have a ripple effect on its products, carefully studying all new data releases prior to deploying changes in its systems.

There are two primary US Government sources of data: The Bureau of Labor Statistics (BLS) and the Census Bureau (Census). Both collect a considerable amount of data about occupations, industries and employment/wages. BLS data uses primarily the Standard Occupational Classification (SOC) code system, which is the designated core system to which all other government systems must relate (crosswalk). At the Census Bureau, a smaller subset of the SOC codes are used called the Census Occupational Codes (Census).

The Department of Labor, Employment and Training Administration funds a project called the Analyst Resource Center (ARC), which primarily serves as a resource for the distribution of data among WorkForce Development Centers in each state. This activity had previously been performed by the "National Crosswalk Center". Among the resources distributed from work by BLS and Census are "Legacy Crosswalks" to older systems such as the Dictionary of Occupational Titles (DOT). Older systems of occupational classification such as the Dictionary of Occupational Titles (DOT) have been crosswalked by the government to both Census and SOC classifications. These cross-references are often referred to as "Legacy Crosswalks". 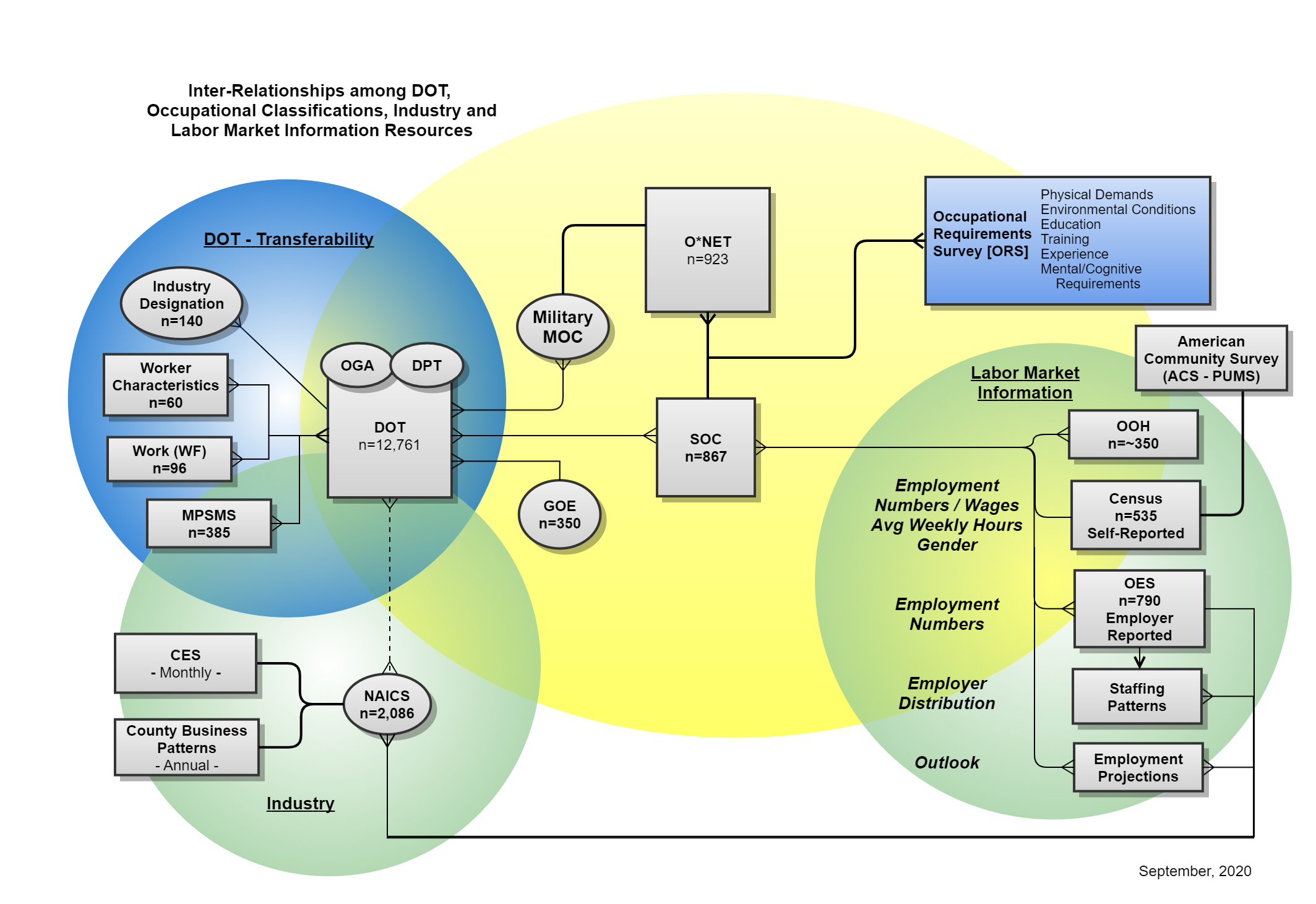 SkillTRAN products and services draw upon these various data resources to provide software and web services to easily sort through many different data sources and quickly retrieve relevant information useful to the decision-making process surrounding vocational rehabilitation and disability adjudication. SkillTRAN has built one data file that is proprietary to SkillTRAN, and that is how it links each DOT occupation to one or more NAICS (North American Industry Classification System) codes so that precise, filtered industry data can be quickly retrieved for placement, employment, and the DOT estimate. SkillTRAN (and its predecessor companies) have researched and refined this proprietary data file since 1985 to enable linkage to other helpful sources of industry data.  Click here for complete documentation of the SkillTRAN DOT Estimate method.

Below is a detailed list of resources commonly used in various SkillTRAN products and services. Not all resources are available in every product.